These air fry cinnamon rolls are perfect and easy to make. My son gets sick from palm oil so he never had cinnamon rolls, until this recipe. Not that we need a sugar rush for breakfast, of course, but it was nice for him to be a part of something he is often left out of. (So many sleepover breakfasts include cinnamon rolls or donuts — both are premade, processed desserts he can’t have because of palm oil.)

Homemade cinnamon rolls are a favorite for lazy Sunday mornings or anytime you want to feel a little special. Most of the recipes for air fryer cinnamon rolls out there call for the canned variety.

However, when you are avoiding palm oil and other yucky stuff, that just won’t work. The good news is when you bake desserts from scratch, you are using higher quality ingredients without the chemicals and preservatives. Plus, there’s just something really special about homemade baked goods, don’t you think?

I know the temptation of making things easy. It’s easy to pop open a can of Pillsbury cinnamon rolls to air fry. But making them from scratch is fast and easy.

Give it a try! Most all of the ingredients are pantry staples: flour, baking powder, baking soda, salt, granulated sugar, brown sugar, powered sugar, vanilla extract, cinnamon. So even if you didn’t plan to make these in advance, you may already have all of the ingredients. You just need to have butter and milk and you can make them.

Here’s a delicious recipe for air fryer cinnamon rolls you can make in the air fryer. Unlike store-bought versions already baked or canned cinnamon rolls to bake at home, these are palm oil free.

These cinnamon rolls are soft, warm, fluffy, sweet, and so easy to make. They are golden brown with a delectable icing. And they don’t require yeast. This recipe uses a quick bread recipe as the foundation, so you don’t need to wait for the dough to rise. You just mix, bake, and enjoy.

What You Need to Make This Recipe

Instead of larger cinnamon buns, you can make them bite-sized by making 12 sections instead of six.

If you are baking these in advance or you have leftovers, you can keep cinnamon rolls in an airtight container. Store them in the fridge for up to three days.

It’s faster to bake cinnamon rolls in an air fryer versus in an oven.

You may have come to this page looking for information on how to make air fryer cinnamon rolls using canned dough. My family doesn’t eat processed foods with palm oil in it. This means, when we have cinnamon rolls it’s because I made them from scratch. Store-bought, canned dough is out of the question.

Compare the ingredients in the recipe above to the ones found in these two brands of premade canned cinnamon roll dough and icing. Whether avoiding palm oil or not, there really is no comparison.

Cans of cinnamon rolls with icing contain lots of ingredients. These are the ingredients in a can of Pillsbury Cinnamon Rolls. It’s their Original with 8 rolls. I am highlighting ingredients that are or may be derived from palm oil.

Natural Flavor is hard to determine if the company doesn’t list what the source is.

When you compare this list of ingredients to the cinnamon roll recipe above, there is no comparison to the quality you get when you bake cinnamon rolls from scratch. Making them in the air fryer is fun and easy.

Just to be fair and to show you how common palm oil is in cinnamon rolls, I looked at a tube of Annie’s Organic Cinnamon Rolls. This brand overall is likely “better” and uses higher quality ingredients than their non-organic competitors.

This is their 5 count package. The ingredients are as follows. Again, I’ve highlighted the ingredients that say palm oil or are usually derived from palm oil.

So you can see that Annie’s Organic Cinnamon Rolls “only” lists palm oil one time, and it’s also organic. That make appease some customers, but my household doesn’t buy foods with palm oil at all — organic or not — because it makes my son sick. We also avoid palm oil for the environmental reasons. Even when it’s organic, it still drives overall demand.

If you are like me, you use your air fryer every chance you get. I bought the appliance and need to justify the room it takes in my kitchen. Did you know they sell ovens now that have an air fryer function? That’s what I’ll be buying if my stove ever goes out.

I love using my air fryer to make desserts and lots of other foods. Baking palm oil free desserts at home means my son can enjoy sweets just like everyone else. And while they aren’t healthy, at least baking from scratch means the ingredients are of a higher quality.

Be sure to preheat the air fryer before baking desserts. Just set it to heat up before you start making the cinnamon roll dough.

What Temperature Do You Put Cinnamon Rolls in an Air Fryer?

For this homemade air fryer cinnamon rolls recipe, you need to preheat the air fryer to 320 degrees F (160 degrees C) for 10 – 15 minutes.

Also, if you don’t have an air fryer, you can bake these in the oven at 350 degrees F for 18 – 20 minutes. Check for doneness as oven temperatures vary.

Instead of placing the cinnamon roll dough logs touching in the pan, leave an inch or two of space around them so they will cook all the way through. If they are too close together, sometimes just the tops will bake. It depends on the oven. With air fryers, they circulate the air well so it’s not an issue.

To make these palm oil free air fry cinnamon rolls, be sure you check the label on the milk. You want to avoid Vitamin A Palmitate. There are several brands of milk at my grocery store without it. Mostly, I buy organic whole milk. Sometimes I find almond milk without it as well.

To be able to recreate canned and already-baked store-bought cinnamon rolls at home has been amazing for my family. Avoiding palm oil is easy when you know what to look for. Sometimes it takes just a bit of planning because you will have to bake most all desserts palm oil free from scratch.

These are easy-to-make, fluffy bites of cinnamon deliciousness. I hope you make them and realize how simple it is to air fry cinnamon rolls from scratch. If you make these homemade, please let me know in the Comments how they tasted.

There’s a lot you can make in an air fryer, including air fryer popcorn. 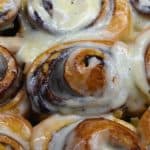 It's best to eat them when they are out of the air fryer and have cooled a bit. However, you can make them in advance or store leftovers in the refrigerator for up to 3 days. Just be sure to put them in an airtight container. Reheat in the microwave to warm before serving.