Cornbread is a southern staple, with fans all over the world. This cornbread recipe is a little different because it uses creamed corn to give it a little extra boost of flavor. The crumb is moist without being crumbly, and the taste is out of this world.

Delight in this delicious cornbread recipe that’s perfect for any meal! Serve it with red beans and rice, gumbo, or any dish you like. It’s the ultimate comfort food. It’s simple with ingredients you probably already have in your pantry.

If you have a cast iron pan, this is the best (and most authentic) way to bake cornbread. Make sure your pan is seasoned, and heat it well before you use it. You can use a brush to coat the hot pan with butter, just make sure that you get the entire bottom and sides.

If you don’t have a cast iron skillet, you can make cornbread in a square baking pan or even in muffin tins. Use these step-by-step directions, and learn how to make this easy cornbread recipe. Prep time takes just 10 minutes and bake time takes 30 minutes. In less than an hour, you can serve this delicious cornbread.

How to Make Cornbread 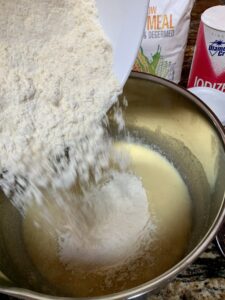 When you make southern skillet cornbread, the appearance, taste, and texture is authentic. It tastes and looks better than if you make it in a metal or glass pan — though those will be amazing too!

When using a cast iron skillet, be sure to preheat the skillet in the oven as you are preparing the ingredients. Once the oven is preheated, take it out and add butter, being sure to coat the sides as well. Using butter will help the corn bread not stick to the pan. It will also give the cornbread a crispy crust on the bottom. The inside will be the perfect cornbread consistency as well. 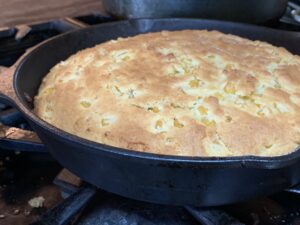 If you make cast iron cornbread, preheat the skillet in the oven. Then add butter to the bottom and sides before pouring in the batter.

Both of these flours are easy to work with because all you have to do is substitute the regular flour in the same quantity as either of these flours. If you use another type of flour that isn’t one-to-one, you will need to adjust the amount.

Cornmeal is naturally gluten free. However, you will want to read for any “may contain” statements if you are on a strict GF diet.

What does adding an extra egg to cornbread do?

Adding an extra egg to a cornbread recipe will increase the egg flavor.

Is corn pone the same as cornbread?

No, corn pone is different than cornbread. It is thicker and more like a cake than the texture of cornbread.

What is the difference between cornbread and Southern cornbread?

Southern cornbread is usually made in a cast iron skillet with butter for crisp edges. It is also less crumbly and doesn’t contain sugar. 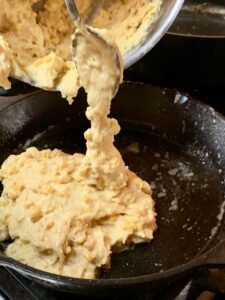 You can make cornbread in a cast iron skillet, in a glass or metal baking pan, or in a muffin tin.

What are the ingredients for cornbread?

The main ingredients in cornbread recipes are corn meal, flour, baking powder, eggs, butter, milk, and salt. Some recipes call for sugar, honey, and creamed corn among other ingredients.

How do you make cornbread not fall apart?

Following any corn bread recipe exactly will help the cornbread not fall apart. It’s important to use the proper ratio of flour to cornmeal and the wet ingredients, including butter, eggs and milk. Changing any of these can lead to the cornbread not having a firm texture.

What happens if you don’t have an egg for cornbread?

Instead of using eggs in a cornbread recipe, you can substitute 1/4 cup applesauce for each egg. To replace two eggs, you would need 1/2 cup of applesauce.

What is the difference between cornmeal and corn flour?

The difference between them is how coarse or fine the corn was ground or milled. Cornmeal is grittier than corn flour. Both cornmeal and corn flour are made from dried whole corn kernels. 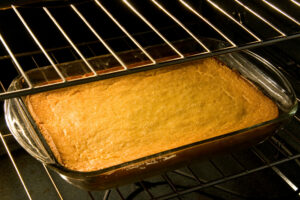 The best thing about cornbread is it’s a bit of a dessert and a bit of a meal. You can drizzle honey over it and serve it as a snack, or use it to accompany a variety of dishes.

There is no need to buy Jiffy muffin mixes or other boxed or bagged cornbread mixes. Cornbread is so easy to make from scratch. And it takes just a bit longer than using a premade mix. Making this cornbread recipe in a skillet is easier than I thought it would be.

Since learning my son has a palm oil allergy, I have learned to bake everything from scratch. Most premade breads, muffins and desserts in grocery stores contain palm oil ingredients.

The great news is baking from scratch is so much easier than I thought it would be. Having pantry baking staples on hand and keeping them in one place has been a big time saver. This way, I’m not hunting around for baking powder, sugar, flour, etc.

I stock up on creamed corn so I can make this or cornbread muffins whenever the mood strikes. If you don’t have creamed corn, you can substitute canned corn kernels. Add two teaspoons of sugar and a dash of salt. If you mix the cornmeal batter with a hand mixer instead of by hand, there will be less whole kernels in the muffins.

Let me know if you make this easy cornbread recipe. I’d love to hear about it in the Comments. Cheers to baking at home. 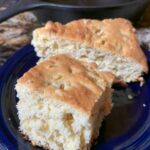 If using a cast iron skillet, preheat it in the oven while the oven preheats. Coat the bottom and sides with butter before adding the batter. This is the best and most authentic way to bake cornbread.