My son hasn’t had donuts in years. Why? Because he is allergic to palm oil. ALL donuts at Dunkin’ Donuts, Krispy Kreme and other donut shops contain palm oil in all their flavors. At long last, he can enjoy a donut cake that tastes like an old-fashioned donut — even if it doesn’t look like one!

To make donut cake, you just need a square baking pan. I have tried to make donuts using a donut maker and a donut pan. However, these were just cake recipes that were shaped to look like donuts. Then I added nutmeg to a recipe and couldn’t believe how much it tasted like a cake donut. Especially when I served it with a layer of powered sugar that set in the refrigerator.

This homemade donut cake recipe is delicious. It’s quick and easy to make. It doesn’t require yeast. You can make it in a square cake pan which makes it very easy. If you have one, you can make it in a donut-shaped pan. Either way, the nutmeg brings back memories of old-fashioned, cake donuts.

Surprise your kids at breakfast or serve for brunch or dessert. What looks like a cake has the surprising taste and texture of a donut! It is extra-delicious when topped with a combination of butter and powered sugar, especially after it sets.

You can also make a simple icing sugar to drizzle on top of the cake. Another option is to make a cinnamon sugar mixture. If you want to have more of a cinnamon taste, you can add a teaspoon of cinnamon to the batter as well. Whichever flavor you choose, you will enjoy. Cut this doughnut cake into squares and serve.

This recipe is very simple and quick to make. To make the cake, you need just one bowl and an 8 inch or 9 inch square baking pan. Line the baking pan with parchment paper which makes clean up easy. It’s also easy to remove the cake this way. Use these step-by-step directions to make donut cake. 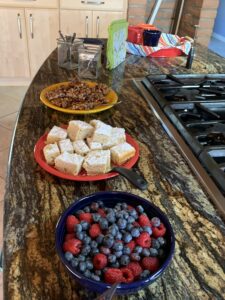 I made doughnut cake for a coffee with friends

For the donut cake topping:

How to Make Donut Cake

You have the option to leave the cake in the pan to cool completely or to remove from the pan and set on a plate to cool. Using parchment paper makes it really simple to remove.

If I’m not serving it that day, I prefer to leaving it in the pan because it’s easier to cover and store after I put the topping on it.

Once the doughnut cake is almost completely cooled, make the confectioners sugar topping. Here’s how you do it:

It takes great if you serve it right away and even better when the powdered sugar sets. If you wait to serve it, add another dusting of powdered sugar just before serving.

If you would prefer a vanilla glaze for the donut cake, you can make it instead of the powdered sugar topping. Vanilla glaze is super easy to make and requires just 3 ingredients: confectioners sugar, whole milk, and pure vanilla extract. Simply drizzle it over the cooled cake. 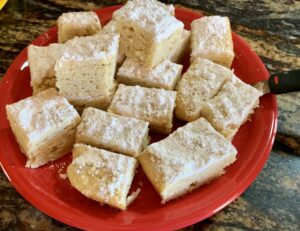 Make it powdered cake donut recipe or use glaze

While donuts taste great fresh out of the fryer, I really think this doughnut cake tastes better once the ingredients and flavors meld together and the confectioners sugar sinks into the cake.

Be sure the cake is cooled before storing, otherwise condensation will build up. Completely cover the cake. You can store it on the kitchen counter at room temperature for up to five days. You can also keep it in the refrigerator.

If you want to freeze the cake, be sure to cool it completely. Do not put a topping on it. Remove from pan and wrap it in two layers of plastic wrap followed by a layer of aluminum foil. Set in the back of the freezer — not up front or on the door where temperatures will fluctuate — for up to 3 months. When you want to serve it, simply defrost overnight at room temperature. Prepare the topping, and it will be ready to serve for breakfast or whenever. 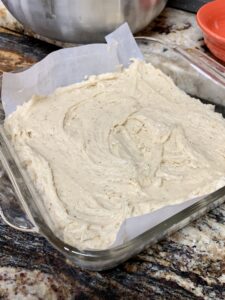 Eggs: Use room temperature eggs if possible. You can set them in a bowl of warm water as you are gather the ingredients.

Nutmeg: A little nutmeg goes a long way. While you can add extra cinnamon, do not add more nutmeg to this recipe. Nutmeg grows on a type of evergreen indigenous to Indonesia.

When I made this donut cake gluten free, I found it had the most authentic donut taste when I stored it in the refrigerator and the powdered sugar had time to set. It also tasted more like a donut when it was cold, right out of the refrigerator, more so than at room temperature. I used Bob’s Red Mill 1 for 1 Gluten Free Flour but you can use any GF flour that is a one-to-one replacement.

How do you make a donut cake?

There are two types of donut cake. One is where you make a cake in a cake pan and it tastes just like a donut. The other is where you use a donut shaped pan and make the donut in it. Donut cake doesn’t require yeast to rise. Instead, it uses baking powder.

What are cake donuts made of?

Cake donuts use baking powder instead of yeast. They are made with cake batter. Nutmeg is an essential ingredient when making a cake taste like an old-fashioned donut.

Is a cake donut cake?

A cake donut isn’t cake but it has the consistency of cake. It’s also what used to be called an old-fashioned doughnut. The “plain” brown doughnuts.

What is the donut shaped cake called?

A donut shaped cake is called a donut cake or a doughnut cake. It tastes like a donut. You cut it into slices before serving.

What is the difference between a cake donut and a glazed donut? 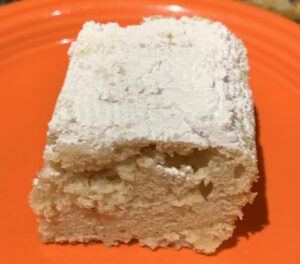 I wish I could explain how much this tasted like a cake donut! It was a treat for my son who can’t have traditional donuts in stores.

Nutmeg really is the not-so-secret ingredient to making this taste like a cake donut. It really gives the old fashioned donut taste. However, don’t add in any extra nutmeg. It has a strong flavor. I also use a bit of cinnamon in this donut cake which are classic spices you normally taste in cake donuts.

If you have a taste for donuts but don’t have the equipment or the time to make them, a homemade donut cake is an easy and delicious alternative.

I am used to making and baking all of our desserts from scratch because premade desserts, like doughnuts, contain palm oil. Making palm oil free desserts homemade has so many less chemicals than already-made at the store or donut shop.

Thank you for baking donuts at home. Donuts in shops really contain a lot of extra ingredients. Being able to whip up this doughnut cake at home means you can enjoy it for breakfast, brunch, an after-school snack, or dessert. See other ideas for a breakfast without palm oil.

Yum! If you make this donut cake, please leave a note in the Comments. Check out my other dessert recipes too to minimize reliance on store-bought desserts. 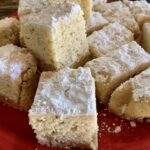 For the donut cake topping: