Orange marmalade is a real treat, so bright and sweet with just the tiniest bit of a bite from the acidic citrus. While any seedless oranges will do, Seville oranges are ideal for this recipe. They can be difficult to find though since they are in season for such a short time (late January to mid-February).

For a little extra zip, add some cinnamon or ginger just before you put the marmalade into jars. It will give it a nice little zing of surprising flavor. I recommend Red Ape Premium Ground Cinnamon. It is actually real cinnamon where most of the cinnamon in the grocery store is not. Real cinnamon is milder and sweeter.

This recipe freezes well, and it is good for canning. Spread orange marmalade on French toast, crepes, pancakes, bread or toast. I enjoy it on sliced bananas and in oatmeal.

While there is a bit of prep, the taste is incredible. Making homemade marmalade is easy; it just takes a bit of time. Follow these step-by-step directions to make orange marmalade.

Other Time: 8 to 10 hours overnight soak 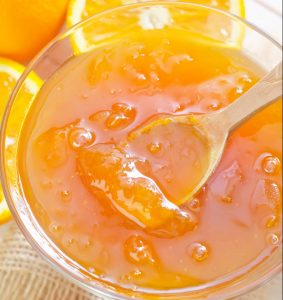 Preserves made from oranges are easy to make but take a bit of time.

How to Make Orange Marmalade 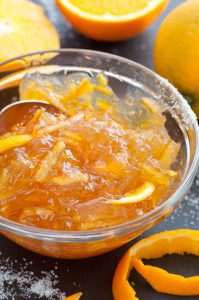 Use a vegetable peeler to remove the peel easily.

Marmalade is the perfect recipe if you have a lot of oranges. Buy them when they are in season and on sale for the freshest taste. If you are lucky enough to have an orange tree, you’ll definitely need to find uses for all the oranges.

How to Use Orange Marmalade

You can add orange marmalade to cauliflower oatmeal and other breakfast foods such as fluffy pancakes.

This orange marmalade tastes divine when slathered on homemade buckwheat bread. It’s also delicious on toast with tea for a light breakfast.

Serve it for brunch with rolls and vegan biscuits. It also is delicious on a peanut butter and jelly sandwich for lunch.

There are many ways to make orange marmalade, but this recipe is both simple and delicious. It’s also a healthy way to use the sweet oranges available during the winter season.

It takes a bit more time to prep but I often easily double the batch when I make this. Once, when I had lots of oranges and wanted to make marmalade for several houses on my street, I had three pots on the stovetop at once. I made 10 batches at once. If you have enough pots, it’s easy to do. The process is simple to replicate.

What is the difference between orange jam and marmalade?

Orange marmalade is made from the orange fruit as well as the peel making it more bitter-tasting than jam. It also uses lemon as an ingredient.

What is the difference between marmalade and jam?

It is high in sugar but also contains the fruit and the peel which are nutritious.

Which sugar is best for marmalade?

White sugar, also called granulated sugar, is best for marmalade. It works well on the stovetop and dissolves quickly into clear liquid. You can choose organic sugar if your budget permits.

Is marmalade thicker than jam?

They typically have the same thickness and consistency. However, marmalade has pieces of the rind which will be firmer than any remaining fruit pieces.

Is marmalade healthier than jam?

My son has a palm oil allergy and palm oil intolerance. Because of this, I’ve learned over the years to cook and bake most all of our foods at home. There are lots of easy palm oil free breakfast foods to make from scratch.

While we have been fortunate that jelly, jams, and fruit preserves are typically palm oil free, we sometimes like to make orange marmalade when our neighbor gives us oranges from their trees. We can only eat so many fresh oranges!

It’s really easy to make preserves, jellies, and jams from scratch too. Try my strawberry jelly and cherry preserves recipes too. Mixing it with this recipe makes them both more delightful!

The perfect start to a winter morning is a piece of toast with a dollop of homemade marmalade. This recipe is for a sweet and tangy orange marmalade, which makes it the perfect accompaniment to breakfast. The key to this recipe is taking the time to peel and pith the oranges before cooking them down with sugar. The result is an intensely flavored citrus jam.

Orange Marmalade is a simple, sweet and delicious recipe that can be served as an appetizer, bread accompaniment, or as a sweet spread to accompany yogurt and breakfast cereal. The use of hot water helps to loosen the pectin that will bind together with sugar and create a sauce that is not only flavorful but also healthy for you.

Orange marmalade provides a range of nutritional benefits. It contains vitamin C, is low in calories, and low in sodium.

The best oranges to use are Seville oranges which is what I recommend using for this recipe if you have access to them. They’re the most flavorful. A little bit of lemon juice will also help bring out the tartness in the oranges. However, I’ve used many types of oranges, and all the marmalades turned out wonderfully.

If you make this orange marmalade recipe, please leave a note in the Comments below. I’d love to hear how it turned out. Thank you for your interest in cooking at home! 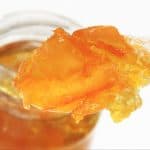