Ah, fried food. It’s the ultimate comfort, and that’s why we like to eat everything from fried chicken to pastries. While most cuisines and cooking frequently require some shallow frying, it can be a little more complicated to try other types of frying.

For example, deep fat frying requires cooking the food in large quantities of extremely hot oil. That’s what gives deep fried food it’s consistently crispy texture. To do this at home, you would need a special deep frying appliance to ensure you’re frying safely. Plus, deep fat frying, although delicious, is really unhealthy.

Some people have recently turned to air frying as a healthier alternative as it doesn’t use any fatty oil but can produce the same crispy results. So, what exactly is an air fryer? And should you be rushing out to buy one for your kitchen? Making foods at home is a way to involve palm oil so we wanted to try it out.

What is an Air Fryer?

An air fryer works kind of like a convection oven (or toaster oven). It produces lots of hot air which is then stimulated to move around at high speed inside the cooker in order to cook the food.

It can produce very similar results to deep frying, helping to achieve that lovely crispy texture to the outside of your food.

The air fryer usually takes in air through a vent, which is then heated by a heating element within the appliance. A fan then takes the hot air and circulates it around the fryer to cook the food.

Hot air is simultaneously released through another vent or duct on the appliance as it cooks. Temperatures can typically reach about 230°C in an air fryer, although temperatures and timings can usually be adjusted depending on the type of food you’re cooking or the recipe you’re following.

Not only that, but air fryers can often reduce the cooking time in comparison to traditional ovens, too. All you need to do is coat your food in a very thin layer of oil in order to produce what is called the maillard reaction in the air fryer.

The maillard reaction is a chemical response between things like amino acids and sugars on your food that gives it that distinct browned look and flavor when cooked. Which is the entire point of frying your food!

What are the Benefits?

The first and foremost benefit of air frying over deep fat frying is that it is much, much healthier. Air frying can use between 70-80% less oil than traditional deep frying, reducing the fat content and calories of your meal by a significant chunk. It’s a great way to avoid some of the potential health and environmental concerns from using vegetable oil, such as palm oil.

Then there’s the safety aspect. When you deep fry food, it requires you to heat up a large amount of oil to very dangerous temperatures. If something goes wrong, like the appliance being knocked over or a malfunction, you run the risk of being severely splashed by hot oil. This can cause severe burns and scarring.

Plus, there’s always the potential for slipping or falling on oil. There’s also the fire risk if a flame accidentally comes into contact with the highly flammable vat of oil.

With air fryers, you don’t have to concern yourself with any of the safety risks. Also, you’ll be enjoying a far healthier meal than if it had been cooked in the deep fryer. 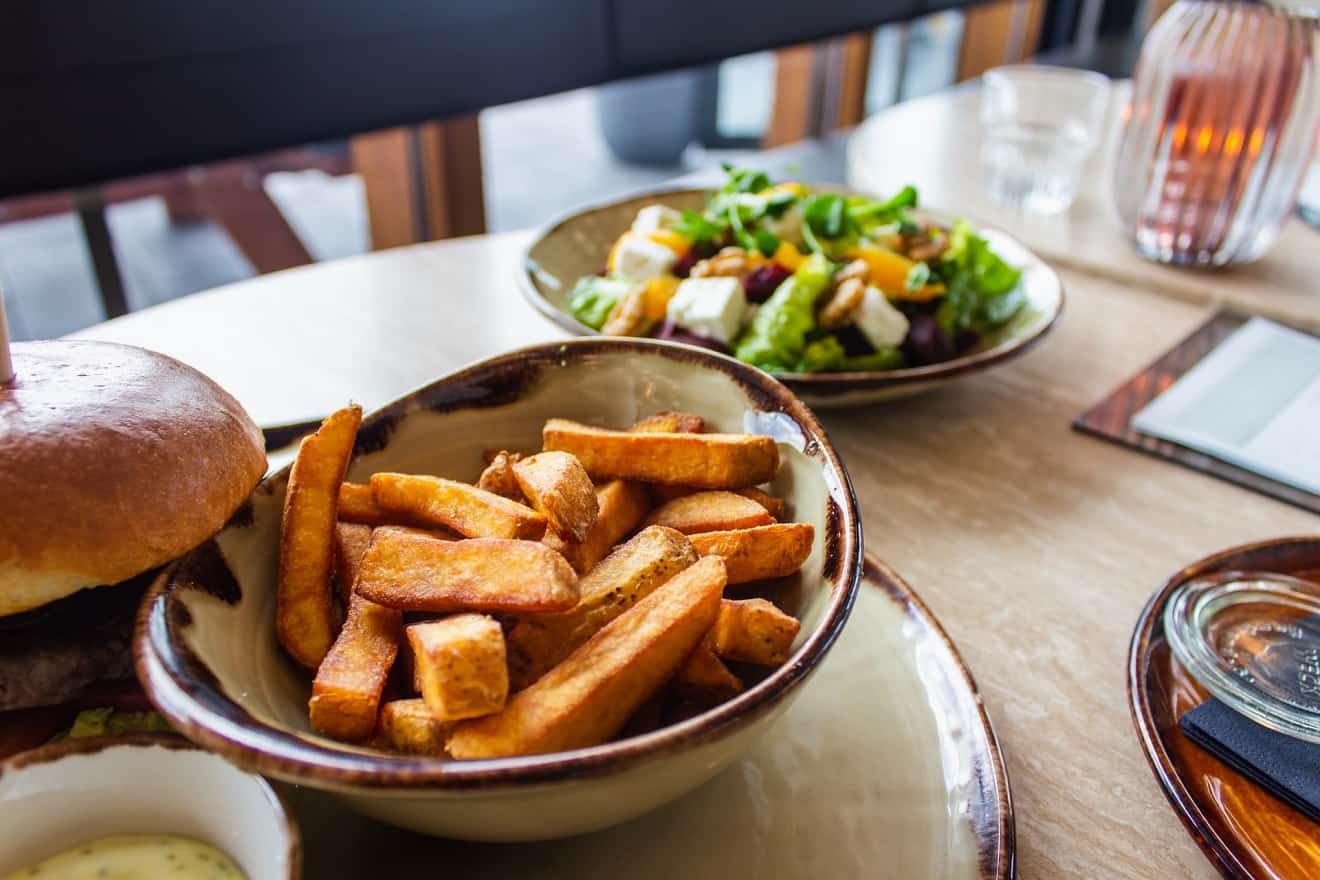 When should you use air fryer

When Should You Use Air Fryers?

Air fryers are great for pretty much any recipe that calls for a crispy finish to an element of the dish. For example, there are many “fakeaway” recipes out there now that attempt to recreate Chinese takeout foods in a healthy way for people who are trying to lose weight.

So, an air fryer can help you achieve that nice crispy finish to your crispy chili chicken without compromising too much on the health component.

It’s worth noting that air frying will produce slightly different results to deep frying. While air frying can sufficiently crisp your food, it may dry it out a little more than the deep fried version.

Plus, there may be a taste difference from using so much less oil and fat.

Can You Air Fry in Your Instant Pot?

It’s pretty easy for appliances to build up in the kitchen, only for you to find that there are some that are only pulled out once or twice a year (if even!). That’s why it’s great when you can purchase a versatile appliance like the Instant Pot with all it’s settings, functions, and cooking options. If you’re struggling to choose between the two, learn the difference between an Instant Pot Vs Air Fryer.

So it can be disappointing to find out the Instant Pot is not very suitable for cooking crispy foods. This is on account of the fact that it uses steam (moisture) to cook the food.

However, the good news is that the good folks over at Instant Pot have actually created an air frying attachment. You can buy it separately and use on your existing Instant Pot. They have created a special lid for your Pot that doubles as an air fryer. How handy is that? In addition, this means you won’t have to store another appliance.

There are tons of foods that cook exceptionally well in an air fryer, including most vegetables. Some of them, such as Brussel sprouts, don’t even need any oil or a very long cooking time to produce a nice crispy texture.

From healthier versions of French fries to juicy chicken breasts, there’s not much the air fryer can’t do. Try some of the following tasty and popular foods in your air fryer:

You can even make air fryer popcorn! Use it to make air fryer eggplant. Eggplant is often mushy when you cook it on the stove; making it in the air fryer gives it a crispy texture.

The best thing I make in it is air fryer home fries. I say it’s the best because it’s my kids’ favorite food. We all love them.

Mistakes to Avoid with Air Fryers

Unfortunately, there are a couple of things that won’t work too well in an air fryer. Some vegetables can dry out pretty easily, like broccoli. You also want to avoid large cuts of meat or whole cuts like an entire roast chicken. They likely won’t cook very evenly.

It’s a good idea to avoid anything “wet” such as cheese or anything that uses a wet batter. It’ll just make a mess!

Are Air Fryers Worth It?

If you’re trying to invest in healthier ways of cooking some delicious favorites, air frying is something to consider. You can avoid palm oil while enjoying the familiar crispy texture of fried foods. Plus, you’ll save on cooking time and clean up – it’s a win-win.